So I wanted an electric guitar sitar, but didn't have a ton of money to buy one, and I didn't want to hack apart a usable guitar. I did however have a lot of wood laying around. So with a little filing and adjustments, I made my own easily removable buzz bridge that costs about $0.50 to make. Its mounted by some extra long screws through the pickguard holes that were already there. There was a lot of saddle adjustments to get each string to ring just right with harmonics, and the action isn't super low or anything, but this mod is easily removable.
Here you are, the Sitar-Caster. (I really should mass market these and make some money.) 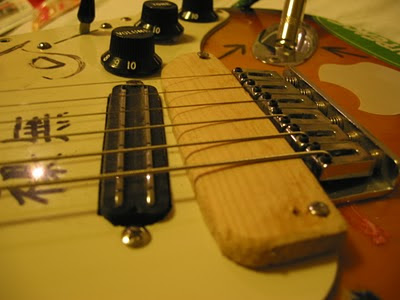 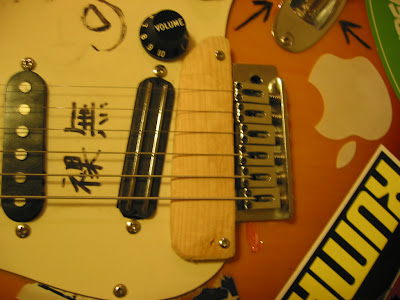 Here's how it sounds 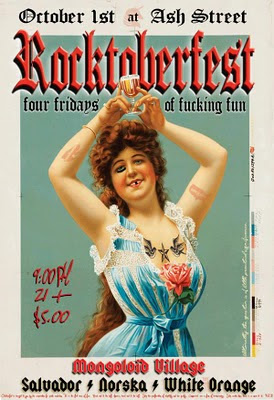 That's right, White Orange is doing a residency at Ash Street Saloon for the month of October, and we're helping them kick it off. I think its been well over a year since we last played Ash Street and almost a year since we played with Mongoloid Village. In case you didn't know, they kind of blow minds. Norska is fun to play with too, so it feels like one big happy family affair, at the place with the dirtiest toilets in town. Much Bier shall be drank I'm sure.

How I Turned an ES 335 Like Guitar Into a Heavy Metal Machine.

I know, I know. What kind of asshole would try to turn a guitar better know for classic rock, blues and jazz into such a beast? Well, I would I guess. It was only a matter of time before I grew some sort of sick fetish towards pushing a guitar not normally accustomed to heavy music, into something people eventually gave me weird looks for. The thing about these guitars is the fact that they sound great because of their construction and semi-acoustic properties. I’ve always though they could be used for any kind of music, if modified to do so. It also seems to be some industry secret, which many classic records have been recorded with. Even to this day, artists continue to record on hollow bodied guitars in the studio. Pet Townshend did almost all the tracks for the Who on a Gretsch hollow body. Josh Hommee of Queens of the Stone Age even records with a variety of hollow bodies. Myself in fact, did almost all the guitar tracks on a heavily modified hollow bodied Epiphone dot, with Salvador. Lets look at the modifications I put this poor guitar through.
1. Stuffing the f- holes. 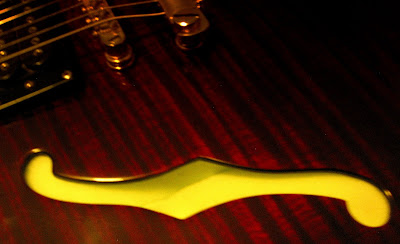 At the volumes I played at, these guitars would feedback like crazy and squeal. Being semi-acoustic, I would get acoustic feedback. This does not sound nice in the least bit. The whole top of the guitar would actually vibrate and air would push out of the open f-holes. To stop this, I stuffed the f-holes with foam. I haven’t had a problem since at any volume. Nor have I noticed any tone loss amplified by doing this. I have a feeling the B.B. King Lucille, and guitars like it will be more popular in days to come, as it is hollowed yet lacking f-holes.
2. Drop tuning and bass strings. 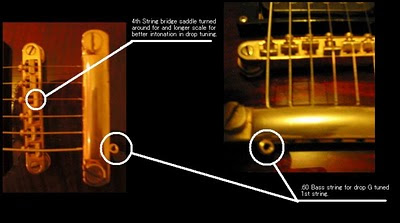 One thing I’ve always wanted with extreme drop tuning is clarity. I use to love using a telecaster for open or drop C tunings. But at the volume I play at, I had to find a humbucking guitar capable of staying in tune and having clarity. I found an old 70s Dimarzio Super Distortion that had great sound for this. Plus the output was hotter and they sounded much better than the stock pickups the guitar came with. Then, one day, the band decided to go to drop G. As in GGCFAD tuning. This is too low for most guitar sets. So, I stuck a .60 gauge bass string at the 1st string position. This was about the heaviest gauge I could fit through the tuning peg of the guitar. (Disclaimer: I wouldn’t recommend tuning a guitar in a higher tuning while using bass strings. The tension could severely warp the neck.)
3. Intonation.
In lower tunings, I noticed the string scale on most of the strings needed to be lengthened. I noticed the G string on the 4th string needed the most extension. To do this, I turn the string saddle backwards to add a tad more length to the strings intonation range. The nice thing about tune-o-matic bridges on these guitars is the fact that you can take them apart for the most part and do such a thing.
4. Some wiring modifications.

I’m sure you’ve noticed the volume controls on most guitars are frustrating or worthless. The lower you turn your volume down, the proportionately more y 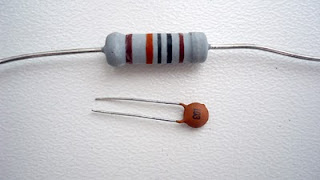 ou loose treble from your guitars signal. The result is a softer and more muddied tone. I like having controls that function, and it really helps to have a volume control in a band that uses a lot of harmonic feedback or dynamics. To fix this problem I did a “treble bleed” modification. A cheap fix as well. The 150K resistor and .001 microfarad capacitor only cost about $1. Some great details for doing this mod can be found here.
Another wiring modification I did was simple for safety. In as many dive bars I’ve played in, I can’t always trust the place will have proper up-to-code wiring and grounding. Even a malfunctioning amp can electrocute a person. You always run the risk of electrocution. So, to make sure the electrocution, won’t kill me, I made a fuse to absorb the shock. Instructions to make such a fuse can be found here.
Ok, enough geeking out. 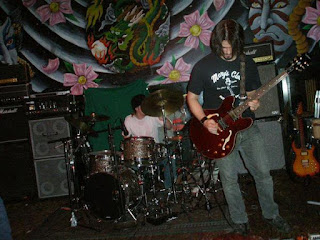 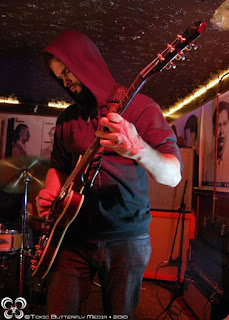 You can listen to this guitar on this album I was lucky enough to make with some great guys.  Most of the rhythm tracks were done with this guitar.

I may never buy picks again. Thanks Oregon Lottery. 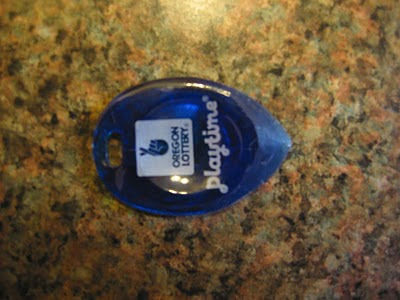 Well, its 10am and I feel like I haven't slept in days. As a result, I made this. I may have found a source for free picks. Thanks Lottery. I'm sure the lab will turn up more weird crap in days to come.
Posted by Lum at 10:04 AM No comments: