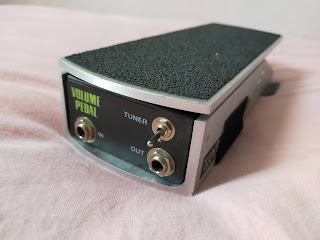 So with the prospects of once again being a supporting guitarist for Don Matsuo this July, I found myself pondering the volume pedal mod I did years ago where I physically stopped the minimum volume the pedal had to control the gain on my amp.  I don't know what to expect with this gig, despite this being my second go around.  Would I need a gain control, or a volume pedal?  I also got tired of pulling out the screwdriver each time I wanted volume swells on my lap steel.  So, the solution for me was clear.  Create resistance to ground on a switch.  I measured 1.55K on my multimeter as the resistance on my minimum volume with the previous mod.  So the idea, was to put a combo of resistors to equal 1.55K that could be added between the volume pot of the pedal and ground, as well as to be taken away (switchable).  After contemplating drilling a new switch hole, I realized I never used the tuner output.  I actually really have no use for it.  So that was my mounting hole.  Also 100% reversible.

So, (1.)I de-soldered the tuner jack, and the ground wire (grey) from the board.  (2.) Soldered the pot ground (same grey wire) to the middle switch lug. The tuner jack left me some holes to run wires through!  (3.) Ran a new wire from one side of the switch to the original ground board connection.  (4.) Ran my resistors (1.55K) from that same lug to the opposite lug on the switch.

After doing this, I found there are a few pedals on the market that do this same thing with a variable resistance pot, such as the new Ernie Ball MVP.  I did my approach, because I didn't want the potential for the knob to get bumped or moved.  I wanted a quick on-the-fly switch to change the function of my pedal.  For me, this is the perfect volume pedal.  (Also there's a treble bleed mod in there as well) 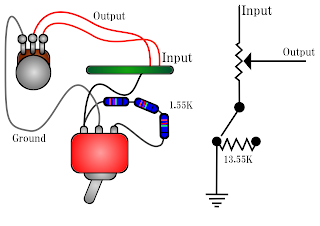 Here's a quick clip of it.