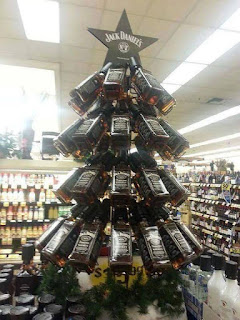 Happy soon-to-be 2018.  Hope whatever holiday you had was nice.  Be that Christmas, Festivus or some kind of pagan goat blood ritual.  I know most people visit this blog for guitar related stuff, but allow me to revert back to the old blog format briefly.   Frankly, my last few guitar related experiments, haven't sounded all that great, and weren't worth posting.  Trust me.  Hopefully new guitar stuff in the future.  I don't like jinxing things this early, but there will be new music in 2018.  Currently working on a new Godzilla Snackas EP, and there probably will be at least 2-3 BSS recordings and maybe a 7" record in the UK.

I guess this state of the union address is really just me publicly thinking out loud about the world and how I and everyone interacts in it as of 2017.  I've been increasingly feeling weird about social media, and it's use in my life.  The last few months, I've backed away from facebook.  I'm not sure how we got to this place currently, but it doesn't feel right.  I remember life before FB and I remember maybe being a bit happier.  One less thing to check and have feelings about.  Perhaps I was more patient and trivial things were less immediate.  A lot of these disconnects and changes in our lives felt like they happened overnight.  I remember a day back in 2008 when people started only sending me text messages.  The phone calls stopped.  Things have felt more and more disconnected since then, and I don't think that's how we were meant to interact with each other.  I question if everyone so absorbed in social media, who at times shouting at a proverbial wall, is truly happier now.  It's been very unnerving to see how politically degrading things have gotten.  It's infiltrated our everyday lives and entertainment.   I'm exhausted by it all.  Even by people I agree with in my own echo chamber.

I guess to sum up what I'm saying is, be good to each other.  Or at least a little better.  Maybe turn off some of the noise and find new ways to connect to people.  Maybe remember those with opposing views you can still find value and friendship with.  Value other peoples lives a bit more.  Even if the general public is hard to deal with.  Alright, this all I wish for in 2018.  I updated the photos archive on the site for anyone feeling nostalgic.  I'll hopefully update some more stuff soon.  In the meantime, I'll be back to working on music, pedals, guitar stuff and art. 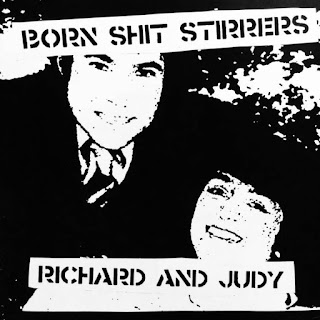 This one took a while.  20 songs clocking in at about 14 minutes.  Lots of setbacks and maybe a few bridges burnt along the way.  I wasn't sure we'd get this one done at all.  Might be this group's Sgt. Pepper.  I recorded and produced this, along with playing guitar, shamisen, some bass, synths, and a few vocals.  https://bornshitstirrers.bandcamp.com/album/richard-and-judy

The Watt From Pedro Show

Been a big fan of this podcast for years now.  Mike always plays really interesting stuff.  Makes my bike rides to work a lot better.  Come to find out, my good friend Jan Bart made an appearance on the show this week, with his band mate from I Took Your Name!   Jan Bart is from Groningen, Netherlands, and plays just about any instrument you can think of.  He was nice enough to play 3 songs from my bands, solo stuff, and recording projects.  You can listen to the full show here:  http://www.twfps.com

You can also check out some of Jan Bart's recordings here:
I Took Your Name
Corvus Straksmetal
alfonso senor leon
doorbell_ditties

Fixing a Half Functioning MXR Pedal 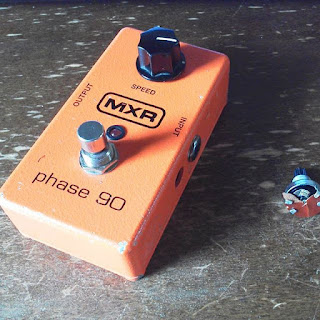 Somewhere on the America west coast, in a bar or venue somewhere, lays my original missing MXR Phase 90 potentiometer knob. It went missing at some point on tour maybe 6 years ago. It bothered me ascetically and I could no longer tweak the large knob with my toe on the fly. I replaced the knob at some point a year later. However, up until a few weeks ago I didn't realized the damaged that had been done while not having that knob there. I should preface that I love MXR pedals and the Phase 90 is my all time favorite phaser. It does however have a small design flaw that people should know about.

While recording a few weeks ago I pulled out the Phase 90 for a slow moving phase effect. My pedal somehow didn't seem to modulate below 12 o'clock. It worked perfectly at a faster rate; how I usually have it set on my board. I was perplexed. I couldn't understand how only half the pot functioned correctly. After taking the pedal apart and poking around a bit, I noticed the pot shaft was able to be pushed down. I then see the bottom of the pot split and bulging downward every time I pushed the pot shaft. The bottom of the pot was FR-4 PCB type board material . The shaft of the pot had at some point been stepped on and pushed through the bottom. An easy thing to happen with any MXR pedal or “stomp box” missing the knobs. Without the knob covers, anyone could easily accidentally push the pot shaft down and destroy the pot function.

The strange part about how my pot broke, is it cracked the PCB board at a point where the wiper was still able to make contact with carbon composition resistance element. The crack only disabled the pot for half of it's function (modulation). Crazy it took 6 years for me to notice it. The original pot is an odd one. It's a reverse audio 470K. I didn't have any of those on hand, so I swapped a 500K linear pot instead. The sweep of the effect is slightly different, but not enough for me to special order of seek out the 470K reverse audio. The new pot has a metal encasing which should be sturdier.

So this is a PSA. If you buy or have an MXR pedal that's missing its knobs, replace them as soon as possible. It's the only line of defense from that pot shaft going through your pedal.

Some friends made a fake rockumentary about the jerk punk band we made.  Kind of a This is Spinal Tap of foreigners in Japan making fun of everyone and everything around them.  Well, hopefully someone finds it funny.
Posted by Lum at 11:44 PM No comments: 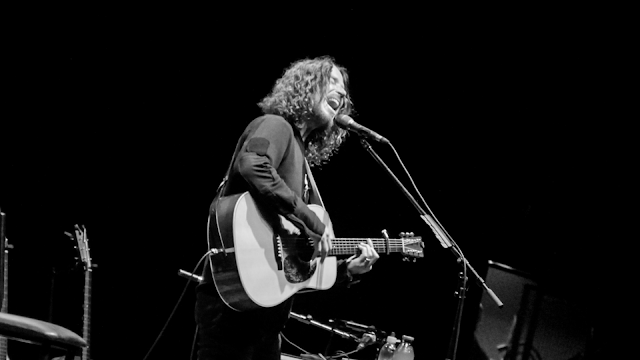 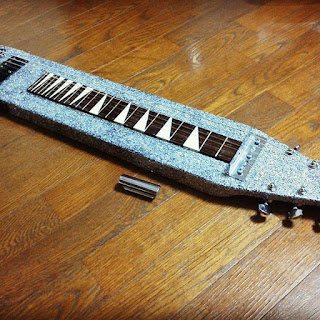 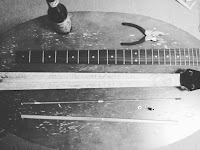 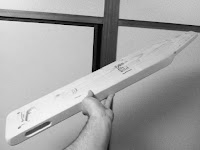 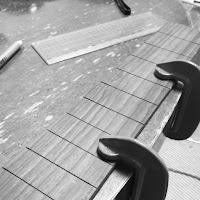 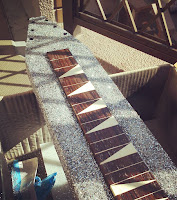 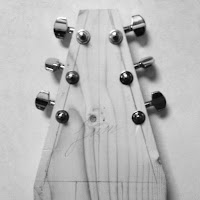 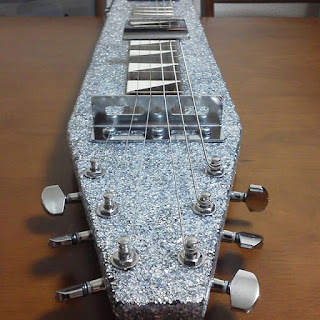 Office Destruction!!!
Posted by Lum at 9:36 AM No comments:

I Hate Your Band (Free Stream) 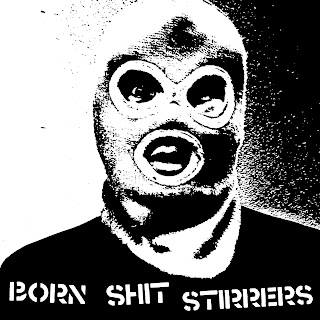 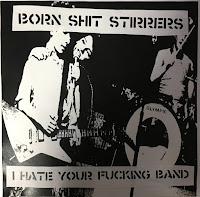 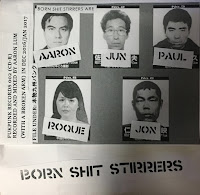 That same old collective of enraged expats living in Japan came together for yet another album.  And by album I mean 13 songs coming in at 8 minutes.  I recorded and mixed this, and managed to add guitar work to it with a fractured arm.  Everything and everyone in Fukuoka, slagged by this group of A-holes.  No one is safe.  Even ourselves.  All our grievances in a minute or less per song.  The full CD can be downloaded here: I Hate Your Band 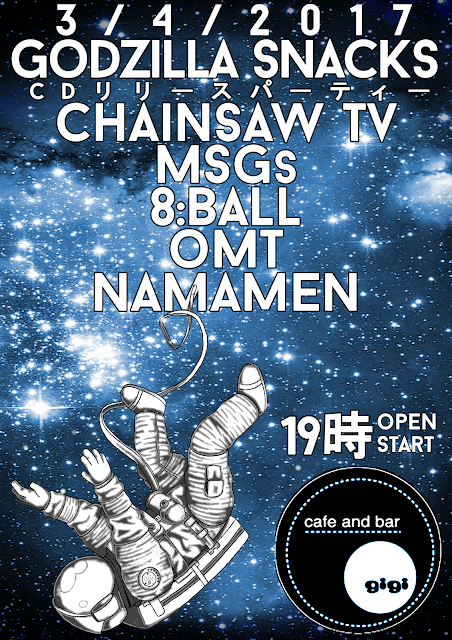 We put together a little lineup of bands and people we like at a venue we like. Should be a good time with good people.
Posted by Lum at 6:45 AM No comments: