When I first was getting into rock music as a kid, I discovered classic stuff from the 60’s and 70’s.  Bands like the Beatles blew me away because it was the first time I was hearing rock bands use more exotic instruments.  This opened up many doors for me musically.  The Sitar was at the forefront in my mind because of how cool it sounded.  I immediately looked into buying one; however I was disheartened to find that sitars couldn’t be found cheap.  I then found out about old Danelectro electric sitars from the 60’s.  By this point those were still a bit pricey, so I found other alternatives.   A cheap guitar company named Rogue was putting out a reasonably priced sitar, but it was still money for something I could only use sparingly at times and it still wasn’t a real sitar.  I thought there had to be an easier cheaper way to achieve the sound of a sitar without buying a whole new instrument.  This led me to discover a company named Gotoh who makes a “buzz bridge”, which could be installed on most guitars to achieve this sound.  This however meant you needed to take off a guitars original bridge and drill new holes in the guitar to install this bridge.  This would make the change more or less permanent.    I didn’t like the idea of hacking any of my guitars into something that would be hard to undo.  I thought there had to be a way to take the buzz bridge concept and make it easily removable.  From there I was basically looking for anchoring points on my guitars.  Areas I could drill a buzz bridge onto.  All my Les Paul or Tune-o-matic styled guitars lacked the room for me to install anything on them.  Plus again, I would have had to hack the guitars by drilling new holes.  I then looked at my knock off Stratocaster sitting in the corner.   What do you know, there is room behind the bridge pickup and the bridge and TWO SCREWS right by the bridge holding the pickguard in place.   At this point a beginning tracing the area and looking for scraps of wood.  I was off.

How a Sitar Works 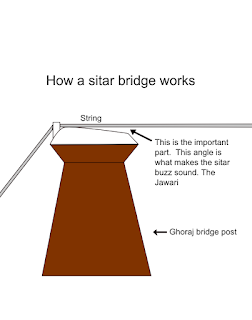 At this point I had already researched and played a few sitars to understand how the instrument gets its distinctive sound.  So, let’s take a look at this more closely.   One of the main reasons the sitar has its distinct timbre with loads of overtones in each note, is because of its bridge (jawari).  The bridge on a sitar has a long sloped or angled wood or bone right before the strings make contact with the bridge.  This creates a buzzing sound, almost like when a guitar has bad fret-buzz from strings being too low.  This is key in a sitars sound and the concept behind the Gotoh buzz bridge and all the other production line electric sitars.  This was what I essentially had to make, an angled buzzing bridge.

Another big part of a sitar’s sound are the sympathetic strings.  These strings aren’t plucked, but are rather droning on their own depending on which pitch is being resonated.  These strings actually lay beneath the plucked and fretted strings on a real sitar, and we see them off to one side of the plucked strings on many electric sitars.  From my experience of playing solid body sitars, these strings don’t vibrate so well, unless the guitar is an acoustic or both sets of strings share a bridge.  So for this project, I opted out on the idea of sympathetic strings.   Plus, adding those strings wouldn’t be very reversible.

How I Made the Jawari 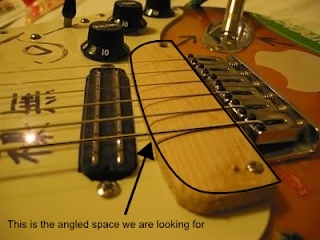 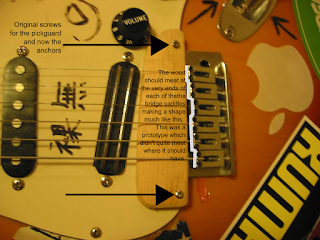 So, at this point the goal was to make a buzz bridge or jawari.  I traced the area that I had to work with behind the Stratocaster’s bridge pickup and bridge and I also traced and measured the distance of the two anchoring pickguard screws.  A key to making this functional was to get the wood I was going to carve out, as close to the guitars bridge saddles so the guitar would stay properly intonated.  I got this prototype close to the bridge saddles, but really you want to measure the position of the bridge relative to the anchor screws, and then measure out the shape of each bridge saddle so the new buzz bridge will lay right up next to each saddle as close as possible.  The last measurement was for the height of the wood I needed.  The distance of the guitars strings to its body was measured.   After all these measurements I cut the wood I had to the proper dimensions.  I then sanded down a slope going downward away from where the wood was going to meet the guitar’s bridge.  After the new wood buzz bridge was cut and shaped and then drilled the two anchor holes the in the measured spots, unscrewed the pickguard screws, placed the new buzz bridge in place and re-screwed the pickguard screws back in place.  Now from here I just had to fine –tune the buzzing on each string.  Some strings were a tad too high or low to get the optimal buzzing overtone effect.  So I had to raise or lower each bridge saddle until each string sounded just right.  If you got the correct height of the strings from the body of the guitar measured, then you should be ok and the adjustments to each string saddle probably won’t be too extreme.  In the end I got a pretty convincing electric sitar sound, as you can hear.

The only other tips I found to getting a good sitar sound would be string tunings and effects.  Because my Sitarcaster doesn’t have sympathetic drone strings, I found alternate tunings like DADGAD  or other open-tunings work really well because you can drone so many strings in that tuning, often times I play melodies only on the G string and drone the other strings.  I also found that some reverb or delay effects on the Sitarcaster only add to the sitar sound.

Well hope my story helps some of you DIY musicians out there.   Send me photos of your projects or ideas and questions.


More guitar tips at: Guitar Articles
Posted by Lum at 4:10 AM