New Split 7 Inch Out in July With Big Guest Stars 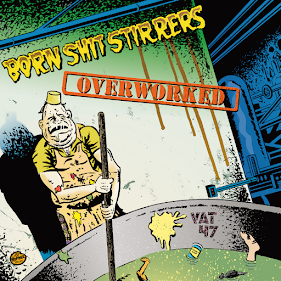 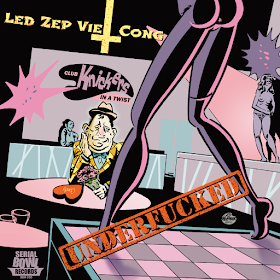 I know....It's been a while.  It's trange how things line up and how lucky I've been the last year.  Even though some people have these ridiculous superstitions about the calendar year number, the end of 2020 was a productive and musically rewarding one.  A band I play in and record (Born Shit Stirrers) decided to finally put some music down on recording after being inspired and cheered on by Mike Watt after being on the Watt From Pedro Show.  I think a lot of us felt in a suspended state, unsure of what to do in the future.  I certainly felt very uncreative around March of 2020.  The kind and wise words from Watt really got me out of my funk for sure,  "You're out there on the ocean all alone on a boat."  "What are you gonna do?" "Tell the wind which way to blow?"  In other words, make do with what you got and adapt to the situation.  Watt also always ends his radio show with "keep your powder dry".  Kind of an always be ready mantra of the revolutionary war.
Not only was he the kick in the pants we needed, but he also was kind enough to add his bass to our tracks.  It's got to be one of the biggest musical moments of my life for me to play on the same tracks as a hero of mine.  I'm really proud of how everything turned out and came together, even though I'm probably going to hell for the lyrics.
Watt wasn't alone either as a guest star.  We were lucky enough to have Joe King(Joe Queer) from The Queers and Reverend Nørb from Boris the Sprinkler grace us with their vocal stylings.  The songs will come out on a split 7 inch in July on Serial Bowl Records in the UK with friends from another semi-local band in Kumamoto Japan, Led Zep Vietcong.  The album names were definitely inspired by the crappy company I was working for last year and our sexual frustrations in lock-down.   I know July is a ways away, so here is a track to wet your beak to until then.  A cover, believe it or not about Richard Gere and a gerbil.  Written by geniuses from Salem/Portland Oregon, The Bumble Bees
Enjoy!  ~Lum
Posted by Lum at 7:56 AM