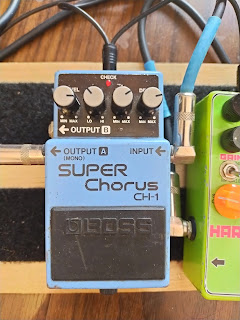 Ah the downtrodden Boss CH-1.  It was a exciting pre-show purchase for me a 20 something circa winter 2003.  Having grown up on a healthy dose of lush chorus from Nirvana to The Police, I was looking to recreate those tones.  I'm sure my heart was set on a Electro Harmonix Small Clone or Poly Chorus, but the lowly Guitar Center at the time only had the Boss.  It did the job, but as time went on (17 years now), as I read the bashing of it on various guitar forums, and as I played friends' Poly Choruses, I realized the damn thing didn't do all I wanted it to.  I wanted the wacky quick modulation.

I found some great mods online for altering the delay time from flanger to more extreme chorus by changing 47pf cap on the C10 cap to a lower or higher value, up to 100pf.  Unfortunately, upon opening my chorus (bought in 2003) I realized it was made of all surface mount components, which are a bitch to try to mod (not recommended).  Not only that, but upon close inspection, I realized the whole circuit is different with a very different chip powering the delay.  They really should have just named my pedal a CH-2 or something.  After a lot of searching and research, it turns out Boss' schematic refers to it as a CH-1T(Taiwan?).  It really helps when trying to search for it.  I guess Boss decided to go with the new layout sometime after 2001.  That said, I'm not sure I really hear much differences in the old to new models.  But the old analog mods will not work on this newer model.  So after more searching I came across a great blog that had a newer digital mod. Here:  https://proto-schlock.blogspot.com/2013/04/boss-ch-1-mod-digital-version.html?m=1

This guy changed the value or the R63 resistor to around 1.8K.  He also had some other interesting mods which I will get into later.  I didn't want to be too invasive to my pedal, so I opted to add a 8.2K resistor in parallel to the original 15K to cut the total resistance value to around 5.3K. Worked great!  Wacky quick modulation galore!  However, I got greedy and tried poking around at the circuit to find what controlled the delay time on the chip.  I had some luck with the R43 resistor, but dropped the pedal in doing so.  The modded, very small resistor pictured above snapped off.  Upon many failed attempts, I finally settled on bridging the connection for 0 resistance.  I got even quicker modulation up to 99% of the rate control knob.  However it folds in on itself at the very last 1% maxed position to cancel out the movement.

So, here's the disclaimer* DON'T TRY TO MOD THESE SUPER SMALL COMPONENTS UNLESS YOU'RE WILLING TO DESTROY YOUR PEDAL OR UNLESS YOU HAVE THE PROPER TOOLS AND SKILLS.  Seriously this was a pain to mod.  I think bridging the resistor ended up being easier in the end.  Maybe next time just a small dab of solder over the resistor.

Now another mod I see a lot of people attempt is adding vibrato to a chorus pedal.  They are in fact the same circuits but with chorus, it adds the dry guitar signal.  Where as vibrato is just the modulated signal only.  So, if you have a stereo chorus (two outputs) like my CH-1, usually you can just add a jack plug connected to nothing into the output B or second output (usually) This will make the pedal send the second output dry signal to nothing.  Muting it, turning your main output to the amp into vibrato.  Hope this helps some people!  If anyone figures out a safe why to mod the delay time to flanging and deeper chorus, let me know.  Here's a quick video sample. (of the earlier mod plus vibrato)