Thought I'd demonstrate  a few ways to make items not intended to be microphones, just that.

The first example in the video above, uses a guitar pickup as a mic.  Usually pickups have to be at least slightly microphonic to pick up the human voice or other non-magnetic objects.   Not to be confused with harmonic feedback which resonate as a guitar is intended.  Microphonic pickups are caused by the actual coil wires vibrating or resonating.   Often causing unpleasant squeals.  These are usually un-potted pickups.  Un-potted pickups will pickup other sound sources better than potted ones.  Sometimes you can coax a potted pickup to act as a mic with enough gain on the amp as well.

The second example uses an everyday common loudspeaker.  The mechanics of a loudspeaker and a common dynamic mic we all use are the same.  A voice coil, a magnet, and a diaphragm, to either absorb or project sound waves.  Both loudspeakers and dynamic mics can be used in reverse.   Speakers can be used as mics and mics can be used as speakers.  However, I don't recommend using your favorite mic as a speaker.  The frequencies won't be reproduced well and you could potentially damage that mic.  Piezo elements as well,  used on a lot of musical instruments can also act as a pickup or a speaker of sorts 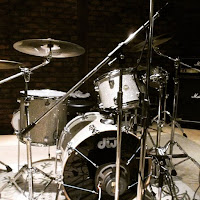 A common use of a speaker as a mic, is for a kick drum sub-kick.  To supplement another kick drum mic with sub frequencies.  These can be easily made from a variety of speakers.  Just connect the positive to the hot of any connecting jack and the negative to any ground wire connecting  jack.  Some people make nice enclosures and mounting systems, however I found I didn't really need to, as you can see in the photo to the right.  The magnet of the speak sticks to most mic stands and with a few bungee cords you can hold any speaker in place.  You will find some speakers pick up low frequencies better than others.  Size matters a bit, as well as cone material and flexibility.  You can experiment with other parts of the kit as well.  Word has it the snare drum on Queens of the Stone Age - Songs for the Deaf  used a small simple speaker as a mic on the side of the snare drum.

The final clip of the video simply uses the speaker as a kick drum its self through a guitar amp.  A cheap kick drum, if you don't have one!  You could put a speaker in an enclosure and have yourself a stompbox to accompany you.
Posted by Lum at 9:50 AM