The Treble Booster, Secret Weapon of the 70's. Now in Standard Power 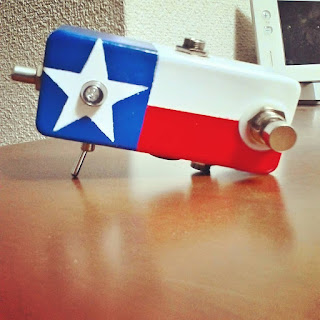 Happy new year and rotation around the nuclear fusion reactor everyone.   Let's talk treble boosters.  For years I didn't understand them and just passed them off as an oddity of the past.  Most of us guitarist don't need more treble.  In fact some guys I've heard are ear piercing.  I used to think you'd get the same thing from and EQ pedal.  I couldn't have been more wrong.  What I found was using a treble booster helped cut through a band mix and they're great for solos.  It does this by cutting some of the bass frequencies that get covered up by the bass guitar or kick and boosts some of the really sweet spot frequencies so the guitar can stand out.  It also adds a bit of hair on an already distorted amp.  The tone is very unique and badass.  So let's look at how and why I built an odd take on this cool effect from the past. 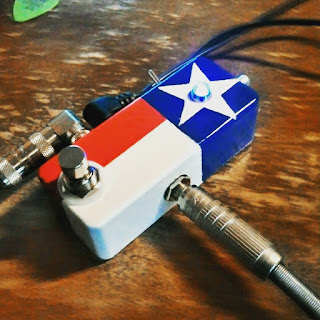 A while back I realized I had a bunch of germanium AC128 transistors laying around, and a super small enclosure I hadn't figured out what to do with. Around this time, a friend of mine sent me to tonefiend 's project of a flipped Dallas Rangemaster Treble Booster.  I was intrigued to try this circuit, after reading about positive ground circuits of the old days like the Fuzz Face and Dallas Rangemaster, which could be reversed to negative ground by flipping the circuit upside down.  Thus allowing us to run the pedal on a standard power supply, and daisy chain it to other pedals.  I was also intrigued by some of the illusive tones of the 70's like Tony Iommi of Black Sabbath, Brian May of Queen, and Marc Bolan of T Rex.  The circuit seemed small enough I could fit everything in the enclosure.  With a lot of measuring, I barely made it.

However, I ran into problems after breadboarding it up.  It didn't work.  I gave up, until last fall.  Tried to test the circuit again; this time flipping the transistor around.  Worked!  I've ask folks with more electrical knowledge about why my circuit worked with a backwards transistor (emitter going to ground)  and didn't really get an explanation.  Seems every schematic I've seen for flipped positive ground circuits has the transistor in the wrong pinout?!  Everyone else can't be wrong can they?  If I get an explanation, I'll update this.  But I've got a pedal and schematic that works.  And it sounds pretty damn amazing.  That same friend of mine and I were testing it out last week, and it just seemed like the magical pedal that made everything sound better.

I went with most of the same values as the tonefiend used and added a few different options.  I added an input cap selector switch like that of Analog Man's Beano Boost.  You'll need a ON-OFF-ON DPDT switch wired as in EX.2  In the "OFF" position, the middle cap gives us a standard vintage treble boost with .005uF.  The switch in the above "ON" position adds .005uF to .005uF to give us .01uF.  This acts as a bit of a mid boost.  In the bottom "ON" position with .005uF added to .01uF, gives us .015uF.  This is more of a full range boost, with more bass.  I also added a .001uF cap to ground at the very end of the circuit.  This helped cut down on some of the high end noise.  You'll have to experiment with different transistors to find one that isn't too noisy.  Germaniums can be finicky.  The bible of these DIY clones was written by geofx , with every detail addressed, right down to the voltage bias.  I couldn't get the same readings as his, probably because of the flipped circuit.  However, this pedal sounds great with my values without a tweaked bias. 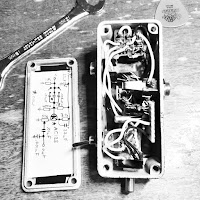 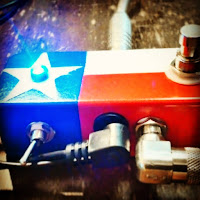 In the end, I decided to go with a Texas flag paint job.  "Dallas", Rangemaster.  The only other advise I have, is keep this pedal in the front of your signal chain.  Much like a Fuzz Face, it needs the right impedance, or it sounds nasty.  Also, you'll find these pedals don't sound inspiring through a super clean amp.  You'll need to run it through something slightly to really broken up.  Have fun.  I'll try to get some audio or video clips soon.