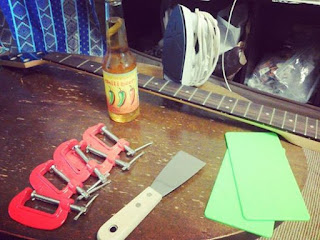 So by no means am I a luthier.  I don't recommend this procedure for every guitar.  I had a cheap bass that was unplayable and ready to be turned into firewood.  If you have a guitar that's not worth the cost of fixing, this could be an option, only if you're willing to part with the guitar if something goes wrong.

I bough this old Epiphone Thunderbird body and neck for about $15 off a scrap pile in a store here in Japan 3 years ago. After making a nut and trying to adjust everything I learned an important lesson. Loosen up the truss rod nut first on an old rusty neck and put some lube on it before you ever try to tighten it. While trying to fine tun the neck bow I snapped the truss rod. My heart sank. I got the bass up and running, but there was always so much bow in the neck, that it was painful to play. The strings were probably about 3/4s of and inch over the frets.  I mostly used it in a down tuning so I got away with it for a while. Replacing the neck would be tricky as the neck pocket was smaller than most p-basses and jazz basses.

Fast forward to this spring, I was rummaging through another free scrap heap in a guitar store and found a cheap Chinese looking neck that looked about the right size for my Bird. It was! However it was a 24 fret neck and the mounting position would make the scale totally wrong. So the neck sat there for a few months bothering me. I tried thinking of ways I could mod the neck, everything. Then not long ago I just decided, "hell, let's rip off the fretboards on these necks and see if I can just swap truss rods."

So, I opened up a weird chili beer I found, grabbed my clothing iron, puddy knife and hammer and went to work. Knowing that one of these ideas would be a mistake. But, a cheap learning experience.  I slowly worked the knife with the iron on the top frets moving up the neck;giving nudges with the hammer as needed. It worked!  Turns out this is the way pros remove fretboards.

So, I get both fretboards off and notice the cheapo free one had a nice strong and new looking truss rod. However the receiving neck had a much thinner rusty truss rod. I needed to route out that channel a bit thicker for the new truss rod. No power tools. To the hardware store and I get some hand chisels. 2 hours later with some sandpaper, I have the new truss rod flush with the neck.

I buy 5 C-clamps at the dollar store and a few cheap stamp pads, and glue the fretboard back with wood glue I bought in the States. Taping off the nut end to block the glue from seeping in.

Surprisingly the instructions said only 24 hours to dry was enough. I waited a bit longer. No creaks, no cracks. Put it together.  Low action. It's worked.  I now have a functional truss rod.  I saved a cheapo cool looking bass for little money and a little sweat.

So a job that could have cost well over $300 costed $28 total.   Pretty good option for a guitar that wasn't worth the professional repair cost.