If you're like me, you've been through a few rigs or you've at least re-designed it more than a few times.  I big part of music I love, is the use of dynamics.  Soft to loud, loud to soft.  It's a big part of the emotional part of music. I often have done what many people do in modern times to get these dynamics with an electric guitar and amp.  Either used a boost or distortion/fuzz pedal on a clean amp, or simply use the footswitch on my two channel amp. Pretty simple.  However I've been in situations where the I'm playing through a "Fender" style two channel amp with no footswitching abilities, or with an amp that is a simple one channel amp, and I'd like a quicker volume control than simply using the guitar's volume knob.

So how do we make a footswitch like channel switch on an amp with no footswitch?  There are a few simple ways which I've learn from people much older and wiser than me. 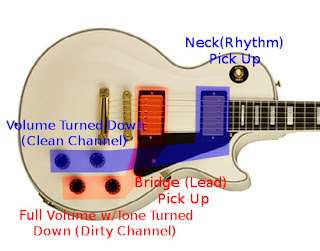 The first technique is actually the oldest idea.  Before there were fuzz pedals or boost pedals, players only had a volume knob.  Gibson guitars actually gave you two channels on their guitars by giving you two volume knobs, one for the bridge pickup and one for the neck.  They actually named these "channels" on their toggle switches as "rhythm (neck PU)" and "lead (bridge PU)"  The intended idea behind this is to dial in your basic tone on the amp with the neck(rhythm) pickup with the volume down enough to barely break up the amp.  When you switch to the bridge (lead) pickup the volume will be fully open and much louder and more distorted.  However it will be much brighter, that's when you'll need to turn down the "tone" knob to cut enough treble as you desire.  This technique works pretty well, and I've used it quite a bit in situations with no pedals and only a Gibson on a good amp.  I love where the toggle switch is on a Les Paul.  You can really hit it on the fly with your thumb.  Most of the guys you probably love from the classic rock era of the 60s and 70s probably started out this way, or continue to use this technique.  check out Page demonstrate it here: 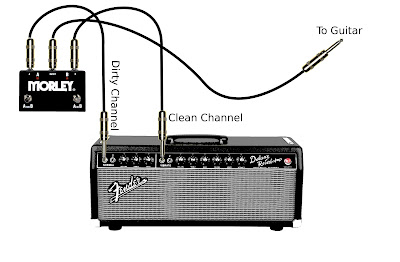 The next idea uses a two channel, non-switchable amp such as a Fender Reverb.  There are a ton of amps modeled after this amp and you've probably seen quite a few.  The amp actually has two sets of two inputs, for each channel.  To make this switchable by a footswitch, all we need is an ABY box.  A pedal which enables us to spit a signal and gives us the ability to switch between the two channels.  We can set each to different volumes or EQs and have two tones that are switchable by foot.  Simple. 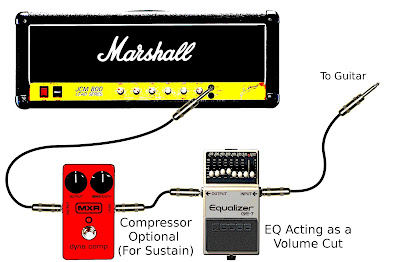 Lastly, we have an interesting idea which actually is similar in principle to the first technique.  We'll simply cut the volume of an amp by using an EQ pedal.  For years I always used the EQ as a boost.  However most EQ pedals also allow you to cut the volume as well. The great part about this is we can shape the tone of the cut signal to customize it better.  EQ pedal off, gives us our loud full volume tone.  EQ on, gives us a clean channel.  I personally like to add a compressor to the clean signal to give it a bit more sustain and fullness.

Even if you're happy with your setup as is right now, it's always good to have the knowledge of other ideas  You never know when you might need to use them.  I've played shows where most of my pedals aren't working or a cable has gone bad, and I've had to resort to some of these techniques. 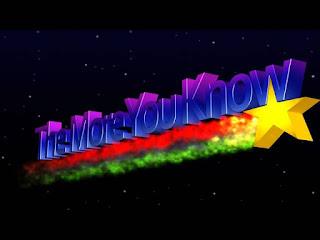