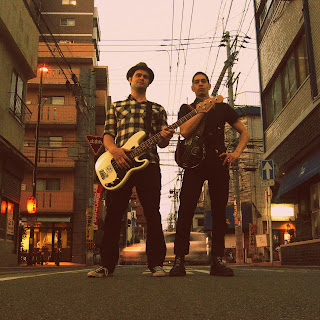 What is Revolt 1989? Well, the un-obvious answer is……….Well it was kind of a band. Sort of, for one night live and for a few days of recording. A short lived band I imagined while living in Asia. It was also the year of a very famous protest in Asia. Over the last two years I watched quite a few of these revolts. Ideas that now spread almost as easily as the wind. Much like what the wind would carry where I lived. A phenomenon called yellow sand. No not a derogatory term. Yet, a real thing; a dust from China, which would appear all over my stuff overnight, if I had left my windows open. One day, I found this sand and dust on my bass. I felt sad that I had neglected this instrument in such a way, even for a day. So, I wiped it off and began to play it again. Not long after that, one fall afternoon, I met a few guys in a nearby park. These fellows also played stringed instruments. One of those hombres was Juan Pablo. He played a bass once in Panama. He also played a jovial accordion, which brought many smiles. One night we wrote some songs together on a bridge, at the edge of a red light district in a far off land. It was a cold night, yet somehow, we met many crooked and twisted fellow Thud Stick players that night. We also somehow wrote a few songs on that bridge. The view was amazing, inspiration was running high, and some strange people came and watched us play. I then ran home and quickly bought a Theremin. Juan Pablo then sailed on for new lands and new frontiers soon after. I felt it was a great collision for the Thud Stick, which I won’t soon forget.
Posted by Lum at 7:40 AM